It is the leaves of loquat belonged to rosaceae plant. It is green arbor or shrub. Its leaves are alternative and long oval-shaped or inverted ovate. There are scattered sawtooth on the edge. There are many fold in the front of base.There are thick and rusty nap behind the base. It is fostered all over the world, and wildly grows in SiChuan and HuBei province .It can be picked all the year. 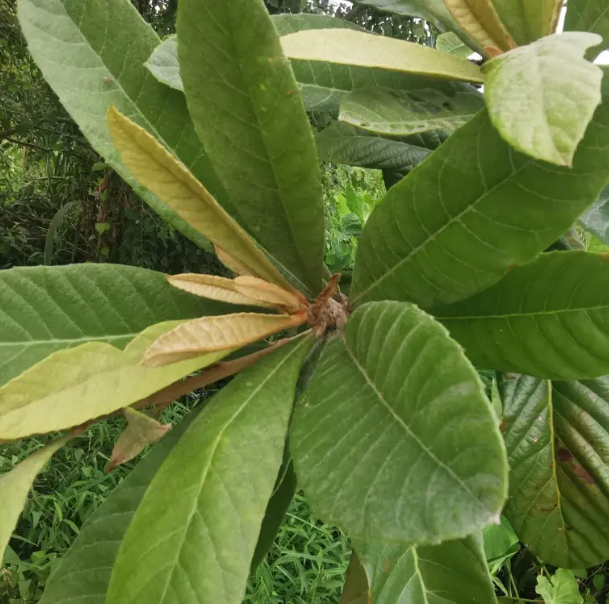 1.Antimicrobial activity. Not only inhibits G + , G-bacteria but fungi as well in vitro.
2.Anti-aging agent, which can be used to improve the health of skin and hair.
3.Anti-inflammatory activity. It has been recommended for use in burn ointments.
4.Obvious antioxidant activity.

5.Calm spirit and has cooling effect.

Health Benefits of Loquat Leaf:
Loquat Leaf has been scientifically shown to have a large amount of incredible health benefits.
1.Loquat Leaf Aids Mucous Membranes
The extract of the Loquat leaf can be used in a variety of ways, In our products, the Loquat Leaf extract will assist the body by acting as a mucolytic agent, which helps dissolve thick mucus that holds toxic compounds.
2.Loquat Leaf Releases Antioxidants
We know that Loquat leaf helps your body to release anti-oxidants, the wonderful anti-aging agents that your body naturally produces.Anti-oxidants have all kinds of benefits, especially the ability to neutralize harmful toxins. It is commonly used to prevent various diseases, increase immunity, and add life expectancy.
3.Loquat Leaf Combats Diabetes
One of the Organic Loquat leaf's most impressive abilities is that it helps combat diabetes. Loquat leaf produces a variety of chemicals called triterpenes, one of which is called tormentic acid. Tormentic acid has been shown to increase insulin production which may help to reduce diabetes.It has been approved by the Chinese government as an anti-diabetic agent because it produces a set of natural bodily chemicals known as polysaccharides, which also increase insulin production.
4.Loquat Leaf Supports the Pancreas
The only way to fight Diabetes is to either supplement the pancreas's production of insulin or to help the pancreas produce insulin by regenerating its cells. But we have strong evidence that Organic Loquat Leaf supports pancreatic cells, which increases the production of insulin, helping diabetics in a natural way.4 Diabetes is a debilitating, degenerative disease. Insulin treatment helps, but anything that can assist the pancreas is of great help.
5.Loquat Leaf Fights Skin Inflammation
One of Loquat leaf's oldest reported benefits is the reduction of skin inflammation. And when Loquat leaf is used in topical cream, it can combat edema and histamine-induced skin contraction. In short, it helps the skin heal from inflammation of various kinds.Skin inflammation can often be painful and the soothing effect of Loquat leaf can be very beneficfial.