PEA is technically known as a "resolution-promoting lipid signaling molecule." The term means that PEA affects central control mechanisms within cells that address inflammation and cellular stress. This extremely beneficial effect has been shown in more than 600 scientific investigations.

The potential clinical applications of PEA are quite extensive, but its research and popular uses are mainly focused on anti-inflammatory and analgesic effects in diseases such as low back pain, sciatica, and osteoarthritis. Preclinical and human studies have also investigated its effects on depression, enhanced mental function and memory, autism, multiple sclerosis, obesity and metabolic syndrome. PEA has many properties comparable to cannabidiol (CBD), but its use is better supported by science, which is where its strength lies.

How does PEA work as an anti-inflammatory and analgesic?

Health benefits of PEA include affecting immune cells that control inflammation, especially in the brain. PEA may help reduce the production of inflammatory substances. However, PEA primarily acts on receptors on cells that control various aspects of cellular function. These receptors are called PPARs. PEA and other compounds that help activate PPAR can reduce pain, and can also boost metabolism by burning fat, lower serum triglycerides, raise serum HDL cholesterol, improve blood sugar control, and aid in weight loss.

Since PEA may help reduce inflammation in the brain, could it also work on other problems that affect the brain?

Yes, PEA has well-established mechanisms involved that play a key role in chronic pain, mental function and depression. There is considerable evidence that PEA plays a significant role in reducing mental cognitive decline and depression caused by chronic pain. Antidepressant effects have been shown in animal models of depression and in double-blind placebo-controlled trials in humans. Studies have shown that PEA helps reduce stress responses, which in turn plays an important protective role against stress and anxiety.

What are the clinical applications of PEA?

PEA has unique effects on factors that control cellular function, and thus may have broad clinical application prospects. Clinical research on PEA has focused on the management of pain and inflammation. In this area, there have been at least 21 PEA clinical trials. These studies included a minimum of 20 patients and a maximum of 636 patients, and the duration of PEA use varied from 14 to 120 days. Dosages range from 300 mg to 1200 mg per day. The form of application of PEA is in most cases an oral tablet, and the most common pain assessment method is the Visual Analog Scale (VAS) on a scale of 0 to 10, with 0 being no pain and 10 being the worst imaginable pain, based on which patients made subjective assessments of their pain level. All but one of the studied clinical trials reported significant reductions in pain intensity with almost complete absence of side effects.

your voice and cry

There are several studies of PEA using it in combination with standard medication. For example, in the management of fibromyalgia (symptoms including persistent pain, depression, and poor sleep quality), when PEA was combined with an antidepressant and neurotatin, patients using PEA compared with the drug alone Fibromyalgia symptoms (including pain) scores were more than 50% lower. "Our study confirms... the additional benefit and safety of PEA in pain relief in patients with fibromyalgia," the researchers concluded.

A randomized, double-blind, placebo-controlled study showed that PEA may have a depressive effect. PEA is used as an "add-on" to the drug citalopram (Citalopram), a selective serotonin reuptake inhibitor used in patients with major depressive disorder. Fifty-four patients were randomized to receive PEA (600 mg twice daily) or placebo and citalopram for 6 weeks. The results showed that depression scores decreased significantly after only 2 weeks of PEA use. Therefore, PEA is considered to have a rapid depression-relieving effect. The advantage of PEA over the placebo group was evident throughout the trial period. At the end of the trial, 100% of patients in the PEA group had a ≧50% reduction in depression scores, compared with 74% in the antidepressant-only group.

PEA has also played a variety of roles in models of degenerative brain diseases such as Alzheimer's, Parkinson's and multiple sclerosis.

What is the recommended dose of PEA?

Are there any side effects or safety concerns?

PEA is completely safe and non-toxic, and no significant governance-related side effects have been documented with PEA in human clinical trials. There are no known drug interactions with PEA. 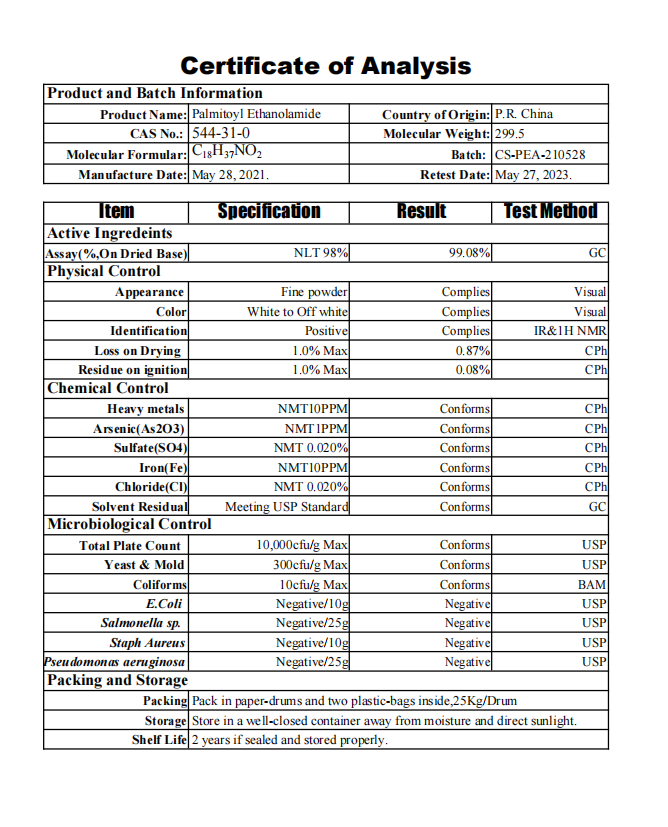