compound. In this paper, the research results of the chemical constituents and pharmacological effects of Salvia miltiorrhiza were reviewed, and its research status and research directions were analyzed to provide some reference for its further research and development.

Salvia miltiorrhiza contains a variety of chemical components, which are mainly divided into two categories: one is diterpenoid lipid-soluble components mainly based on tanshinone-type diterpenes, and the other is water-soluble components mainly composed of phenolic acids. In addition, there are nitrogen-containing compounds, lactone compounds, as well as polysaccharides, flavonoids, steroids, triterpenes and other components. 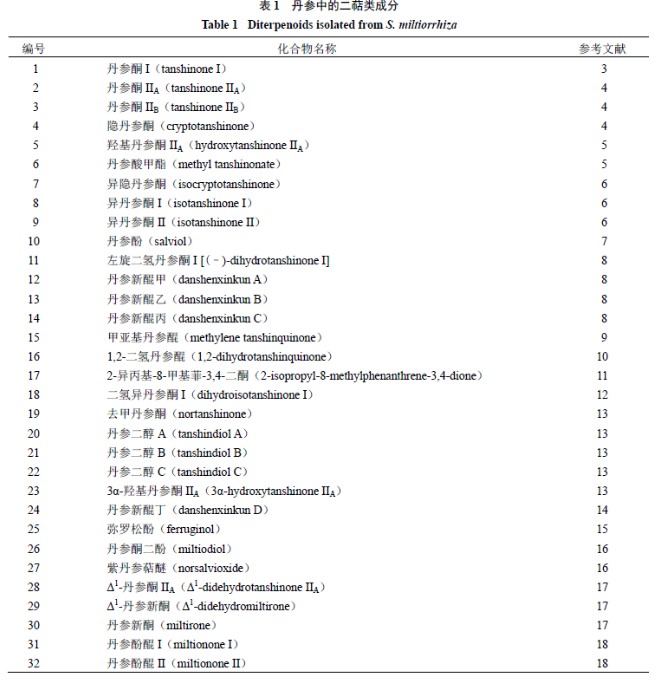 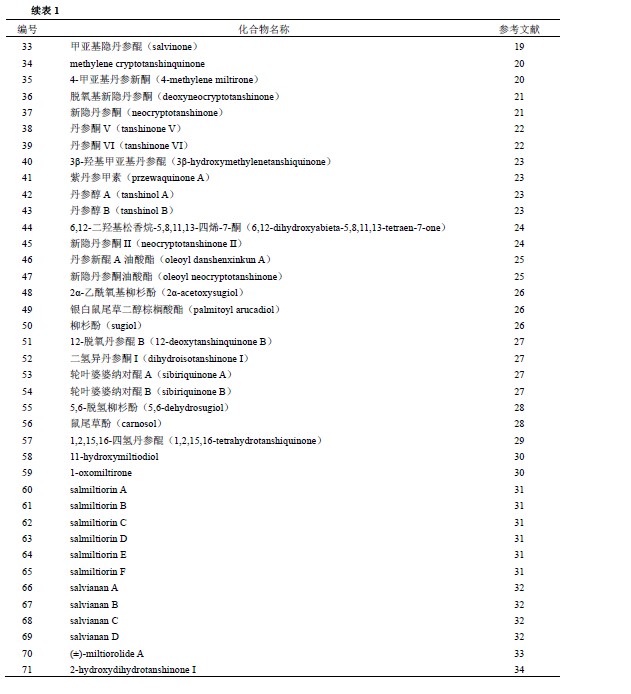 In addition to the common terpenoids , there are other terpenoids in Salvia miltiorrhiza, see Table 2. 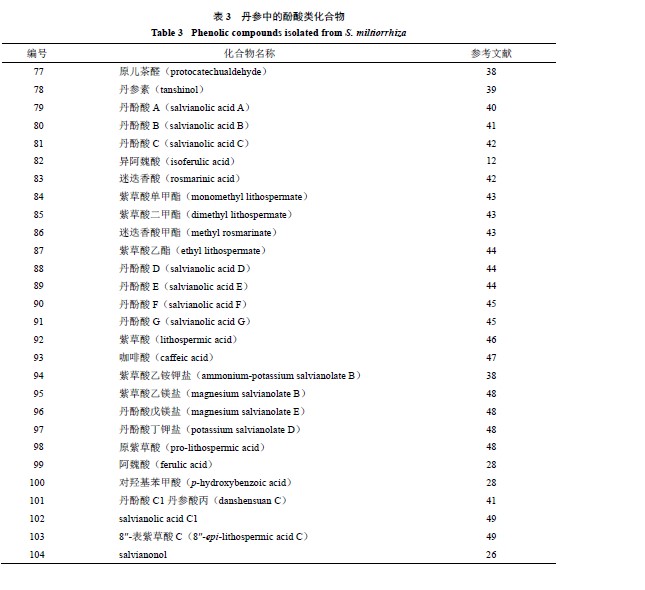 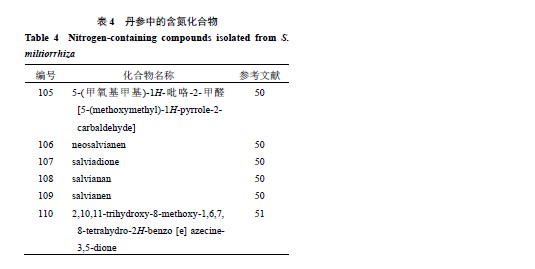 In 1986, Lou et al. [36] discovered a diterpene lactone and named it tanshinlactone. Don et al [26] discovered the compound salviamone with a lactone structure. The lactone compounds in Salvia miltiorrhiza are shown in Table 5.

2.1 Effects on the cardiovascular system

2.1.1 The cardioprotective effect of cell

experiments proved that the extract of Salvia miltiorrhiza, mainly tanshinone IIA, has a certain estrogen-like effect, which can activate protein kinase B (Akt) through estrogen receptor and inhibit Leu27IGF-II-induced Apoptotic effects of insulin-like growth factor II (IGF-II) receptor signaling activation in cardiomyocytes, suggesting that the extract may act as a potential estrogen receptor modulator (SERM) for the prevention of cardiomyocyte apoptosis and cardiovascular disease without increasing the risk of breast cancer [57]. In addition, animal experiments have found that salvianolic acid A can exert anti-apoptotic effects during myocardial ischemia-reperfusion (IR) by activating extracellular signal-regulated kinase 1/2 (ERK1/2) and inhibiting Jun kinase (JNK). The mechanism of its cardioprotective effect was preliminarily explained [58].

Chinese scholars [59] studied 7 kinds of Danshen injections of the same genus and different species in the 1980s, and found that all of them had anticoagulant effects; The coagulation effect is Salvia miltiorrhiza; Danshensu, tanshinone and protocatechuic aldehyde extracted from Salvia miltiorrhiza have anticoagulant effects, and tanshinone has the strongest effect. Maione et al[60] studied the effect of tanshinone IIA on platelet function and its interaction with various platelet activation pathways through in vitro and in vivo experiments. The results showed that it mainly inhibited platelet activation through the ERK-2 signaling pathway, in a concentration-dependent manner (0.5 ~50 μmol/L) selectively inhibits reversible adenosine diphosphate (ADP, 3 μmol/L)-induced platelet aggregation in rats, irreversible stimulation of ADP (10 μmol/L) and collagen (10 μg/mL)-induced activity is low. This study shows that tanshinone IIA is a potentially effective drug for improving blood microcirculation and preventing cerebrovascular disease. In addition, the team [61] also explained that cryptotanshinone, another component of Salvia miltiorrhiza, can also inhibit platelet aggregation in rats in a concentration-dependent manner, and it also has G-protein (Gi)-coupled Platelet ADP receptor (P2Y12) antagonism.

Oxidative modification of low-density lipoprotein is an important reason for the occurrence of AS. Studies have shown [62] that salvianolic acid A, a water-soluble component of Salvia miltiorrhiza, can effectively inhibit Cu2+-induced oxidation of human serum low-density lipoprotein. Meng et al. [63] found that salvianolates could alleviate AS induced by high-fat diet plus vitamin D3 injection by inhibiting inflammatory processes such as regulating regulatory T cells (Tregs) and cytokine levels. In addition, the mechanism of action of salvianolic acid A on AS was investigated in vitro and in vivo, and the results showed that the protective mechanism of salvianolic acid A in AS is closely related to the inhibition of oxidative stress and inflammatory responses and the improvement of endothelial dysfunction [64].

Hyperlipidemia is a risk factor for AS and related cardiovascular diseases. Animal experimental studies have shown [65] that Danhong injection, a preparation of salvia miltiorrhiza extract, has a significant effect of regulating blood lipids, and has been widely used in the treatment of cardiovascular diseases. Lim et al. [66] established a hyperlipidemia mouse model through a high-fat diet, and studied the blood lipid-regulating mechanism of Salvia miltiorrhiza methanol extract (SRme). Hyperlipidemia in mice, the study also preliminarily speculated that several molecular target proteins for the treatment of hyperlipidemia, such as Mcm protein. In addition, Jia et al. [67] evaluated the regulation and underlying molecular mechanism of tanshinone IIA on liver lipid metabolism in hyperlipidemia rats through in vivo experiments, and found that tanshinone IIA could reduce lipid deposition in the liver of hyperlipidemia rats , and can regulate the expression of microR-33a and sterol regulatory element-binding protein-2/Kexin-like proconverter subtilisin 9 (SREBP-2/Pcsk9) signaling pathway proteins.

Wang et al [68] established a rat model of pulmonary hypertension (PH) by a single dose of sc monocrotaline (MCT, 60 mg/kg), and then mixed low and high doses (4.6, 14 g/kg) of Aqueous extract of Salvia miltiorrhiza (AESM) was orally administered to PH rats for 21 d, and the results showed that AESM could improve MCT-induced PH progression in rats. In addition, it was found that salvianolic acid A could improve MCT-induced pulmonary artery remodeling in PH rats by activating the bone morphogenetic protein receptor type II (BMPRII)-Smad pathway and inhibiting apoptosis, indicating that salvianolic acid A may play a role in Patients at high risk for PH have therapeutic potential [69]. Zhang et al. [70] also found that Danshensu could improve the hypoxic Smad3 pathway in rats by inhibiting hypoxia-induced proliferation of pulmonary artery smooth muscle cells. Therefore, Danshensu is a potential therapeutic drug for hypoxic pulmonary hypertension.

Cerebral artery thrombosis is the main cause of ischemic brain injury. Guo et al[71] evaluated the neuroprotective effect of danshensu sodium (SDSS) on IR injury in a rat model of cerebral ischemia induced by middle cerebral artery infarction, and found that SDSS had obvious neuroprotective effect on brain IR injury. It is related to the activation of phosphatidylinositol-3-hydroxy kinase (PI3K)/Akt signaling pathway by SDSS to inhibit apoptosis. In addition, Zhang et al. [72] found that salvianolic acid A can protect the blood-brain barrier through anti-inflammatory effect and inhibition of matrix metalloproteinase-9 (MMP-9), thereby achieving a protective effect on rat brain IR injury.

Literature reports [78] show that Salvia miltiorrhiza polysaccharide can induce apoptosis of LoVo cells, prevent the cell cycle from entering S phase, and increase the intracellular reactive oxygen species pressure, which can be used as a natural anticancer agent in antitumor clinical research. In vitro experiments found that cryptotanshinone can activate the Caspase cascade to induce apoptosis of ovarian cancer A2780 cells, significantly inhibit the expression of MMP-2 and MMP-9, affect the migration and invasion of A2780 cells, and enhance A2780 cells in a dose-dependent manner. Sensitivity to cisplatin [79]. In addition, Cao et al. [80] found that dihydrotanshinone can induce apoptosis by regulating Caspase and cytochrome C, and inhibit the proliferation of glioma cells. This study suggests that dihydrotanshinone can be used as a potential treatment for glioma patients. The researchers also found that Salvia miltiorrhiza can prolong the survival rate of prostate cancer patients, and its component dihydrotanshinone I can interrupt prostate cancer cells and prostate cancer cells by inhibiting the monocyte chemokine-2/signaling and activator of transcription (CCL2/STAT3) axis. crosstalk between macrophages, thereby inhibiting the migration of prostate cancer cells [81].

The phenolic hydroxyl group has the property of being easily oxidized and can combine with peroxides to play an antioxidant role. Most of the active ingredients in salvia have phenolic hydroxyl groups, so salvia has good antioxidant activity. Zhang et al. [49] extracted 15 compounds from Salvia miltiorrhiza, and evaluated their antioxidant activities. They found that salvianolic acid A and salvianolic acid B had the strongest antioxidant capacity, and some compounds had the strongest antioxidant activity at low concentrations. The H9c2 cardiomyocyte apoptosis has a significant protective effect. In addition, research [78] found that the polysaccharides in Salvia also showed good antioxidant activity, and compared with vitamin C (VC), the research showed that Salvia polysaccharides can scavenge more than 90% of free radicals, which can be used to prevent free radicals and intracellular activity Oxygen (ROS)-induced cellular damage.

The immune system is a biological defense mechanism that can effectively prevent [55] the polysaccharide SMP-W1 from Salvia miltiorrhiza and its anticancer and immunomodulatory activities were studied in vitro and in vivo, and it was found that SMP-W1 could significantly inhibit tumor growth and increase rat Serum superoxide dismutase (SOD), catalase (CAT) and glutathione peroxidase (GSH-Px) activities, which promote the secretion of tumor necrosis factor-α (TNF-α), can be developed as Antineoplastic agents with immunomodulatory activity. In addition, Wang et al. [56], the polysaccharide fraction SMPA extracted from Salvia miltiorrhiza, can significantly stimulate the proliferation of splenocytes, promote the production of anti-inflammatory cytokines interleukins (IL-2, IL-4 and IL-10), and inhibit the production of pro-inflammatory cytokines. The secretion of cytokines (IL-6 and TNF) enhances the killing activity of natural killer (NK) cells and cytotoxic T lymphocytes (CTL), and increases the phagocytosis of gastric cancer rat macrophages, which is an effective immune regulator.